Hanging With Friends In Low Places

I love live music. Attending concerts is one of my favorite past-times. The excitement heading into the performance hall as the crowd anxiously anticipates the show, escalating up to the time of the opening act, then reaching a fever pitch once that act is done, there is nothing like it. Then watching everyone dance and sing as the show gets underway till the musician plays that one favorite song and listens while thousands of people sing the song back to him/her. I cannot even imagine what that must feel like to stand on a stage, surrounding by a roaring crowd who is singing every word of a song you wrote back to you. Fantastic! As loyal readers of my blog you have probably figured out I like rock, jazz, classical, even old school rap music; however, I am not a big fan of country music. (No everyone in Texas does not like country music!) But the one thing I love above all musical genres is a great entertaining in a great live performance.

In late July I saw a television commercial announcing a concert event 17 years in the making. Garth Brooks was coming to Dallas. I knew exactly which friends to call and say hey let’s all go see Garth together! They are huge fans so it was an easy sell. They were out of town when the tickets went on sale so my husband and I grabbed our respective laptops at 10am sharp as the gates opened and an entire city made a mad dash for the front of the line. It was crazy! As one show was selling out another was added! Garth ended up performing SEVEN shows in five days. Yep, both Friday and Saturday nights he performed a double header. Like I said, crazy. We ended up getting decent tickets for Sunday evening. 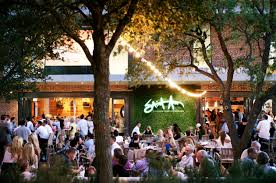 As Sunday approached I asked my husband to decide our pre-concert dining location. What he found was a garden oasis in the middle of a concrete, glass and steel jungle walking distance from the AAC. Saint Ann Restaurant and Bar was the perfect location to get our pre-concert grub on. Saint Ann was originally built in 1927 but has been converted into a modern urban restaurant that has the largest patio in Dallas and is consistently voted “Best Patio” by D Magazine and “Best Outdoor Dining” by Open Table. Furthermore, on the second story of the restaurants, where one must go to use the facilities, the Ann and Gabriel Barbier-Mueller Museum houses their awesome Samurai Collection. Finally, though the patio of Saint Ann steals the show the indoor restaurant and bar is quite romantic and a wonderful space to dine.

Once my husband told me where he was making a reservation performed my standard response, quickly head to their web site to check out the wine list. Though the wine list is overwhelming west coast there were some gems among the fray. The gem I chose for our wining pleasure was MacPhail Sonoma Coast Pinot Noir 2010.

MacPhail Sonoma Coast Pinot Noir 2010: A soft ruby Pinot Noir that offered notes of black and dark red berries and fruits with floral and spice notes, black tea, damp tobacco leaves and a touch of forest floor. It was a lovely balance of fruit with deep earthy notes wrapped in a silky mouth-feel. It had round acidity, soft tannins and a lively finish. This was a playful wine that was the perfect selection for our pre-concert fun. This Pinot Noir was aged for 11 months in 100% new French oak barrels: 40% new, 60% blend of 1 & 2 year old; contained 14.3% alcohol. 90 pts Wine Enthusiast. SRP approx. $29.

We began our delicious dining experience at Saint Ann with their Bacon Wrapped Sizzlers: Medjool Dates, chorizo, and piquillo sauce (an outstanding pairing with the wine!) and hummus dip with fresh pita triangles. We followed up these yummy appetizers with an order of Heirloom Tomato Salad: Burrata, basil oil, black pepper, Maldon sea salt. It was AMAZING! I am a sucker for Heirloom tomatoes and burrata! Even though the wine was a bolder Pinot Noir it paired well with this dish, the creaminess of the burrata evened out the palate. As an entrée I chose the Pistachio crusted Mahi Mahi with mixed fall veggies and pan jua. It was not great pairing but I did not want beef or a heavier dish so I broke my own pairing rules and instead ate what I wanted and drank what I wanted even if the two were not in complete harmony. And you know what, I had a great dinner. The pistachio crust added some pizzazz to the Mahi making it a heartier dish so the wine did not overwhelm it by any means. Other delicious possible entrée choices were roasted chicken, pork tenderloin, duck breast, braised short rib sandwich (best looking item on the menu), pork chops, rib eye, filet and snapper. So there were many other selections that would have been amazing with the MacPhail Pinot Noir, I simply wanted the Mahi. 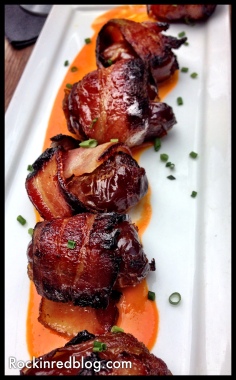 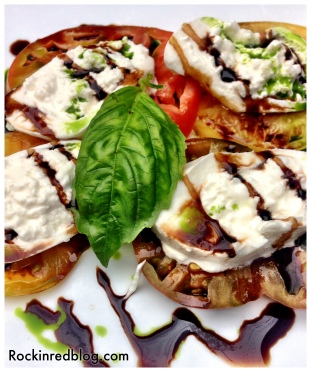 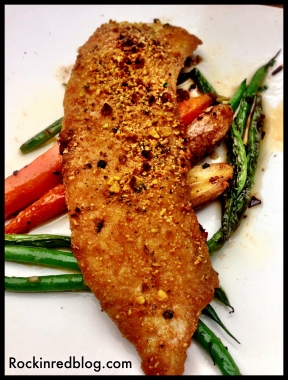 A bit about MacPhail Family Wines: James MacPhail works with conscientious grape growers who rely on personal observation and meticulous care, the same disciplined attention to detail he exercises in the winery. With the goal of making wine that speaks of a place and clearly expresses the character of the grape variety, James insists on slow handwork in the vineyard and wine cellar. All fruit is picked and sorted by hand.

“My goal is to produce food friendly wines with subtlety, elegance and finesse, all qualities I want in my life and expect to share with my customers,” says James. His wines are fruit-focused with appropriate amounts of oak, acidity and tannin. “I like full flavors without compromising balance. I enjoy complexity and mystery too, and I appreciate the challenges and rewards of making natural wines.”

MacPhail Family Wines is situated on James’ private property, just a few feet from his home, and is therefore not open to the public. We invite you to visit us at The MacPhail Tasting Lounge @ The Barlow, in Sebastopol.

MacPhail Family Wines has a great selection of high quality Pinot Noirs, Chardonnays and Roses. Furthermore, MacPhail was voted as one of the Top 10 Wineries in America by The Daily Meal. I encourage you to visit their web site to view their entire portfolio of wines and order some for yourself!

After our delicious garden dinner at Saint Ann we strolled in our cowboy boots (yes, most Texans have cowboy boots) to the AAC to begin the second leg of our awesome adventure. As I said this was the 6th of 7 Garth Brooks concerts. The AAC was completely sold out. They even sold every single seat behind the stage with the band running to the back periodically to accommodate those poor people. I am pretty sure my husband and I were the old two people in the entire arena that did not know every word to every song. The truth is we only knew four songs of 2 ½ hours he performed but that was no problem. We danced along with our friends and enjoyed everyone else singing and had the time of our lives. Garth Brooks gave 110%. His speaking voice was gone but he could still sing a bit. He told us we were going to have to help him and his loyal fans (all 20,000+ that night) helped him for 2 ½ hours! It was one definitely one of the top 10 concerts I have ever attended and I have attended A Lot! In fact, the Wednesday before Garth Brooks I saw Lenny Kravitz and he was fantastic. How is he so funky and cool?! My husband was out of town and missed Lenny but I told him even though Lenny was funky and cool and Garth is not funky they both gave everything they had to the audience and both shows were incredible. If you ever have the chance go see Garth! It does not matter if you like country music or even know any of his songs if you enjoy a great concert that is packed with energy and love between the performer and his audience GO SEE GARTH!

My Song Selection: I tried to share my own recording of this song with you like I did when I recorded and shared Paul McCartney singing “Let It Be,” but my iPhone 5 was dying, running out of space and I had recorded two awesome songs by Lenny Kravitz so I did not have the space to record a performance by Garth; however, many other did record him so I will share a fellow Dallasite recording with you so you get to see a glimpse of the show with one disclaimer, this was not the Sunday night show, our crowd was much louder and crazier than this recording.  Like I said, I only know 4 Garth Brooks songs and two are too slow for this article so I am going with my favorite, chances are you know every word!

Get your own bottle of MacPhail Sonoma Coast Pinot Noir 2010 when you go see Garth Brooks and let me know what song you pair with it. Cheers!

11 responses to “Hanging With Friends In Low Places”