“Darkness falls across the land; the midnight hour is close at hand. Creatures crawl in search of blood; to terrorize your neighborhood.” The ghoulish day of ghosts and goblins is upon us bringing terror and fear across the land. Actually, it brings children in super hero or princess costumes, candy and of course…wine!

Happy All Hallows Eve; aka Halloween! This “holiday” began around 1745 and in its traditional observation is a Christian holiday. Halloween begins a three day liturgical event in the Christian calendar to honored dead saints (hallows), martyrs, and faithful believers. Halloween is strongly influenced by Gaelic and Germanic pre-Christian pagan folklore where they honored the passing of their dead before the start of winter. Christianity, a religion known for borrowing, translated the Germanic tribe’s rituals into the Christian holiday of All Saint’s Day. As is traditional in Christian holy days of obligation, the observance of All Saints Day (November 1) begins the evening before with church attendance and a feast. Additionally, since the evenings before holy days of obligations church goers are encouraged to abstain from meat it became popular to eat vegetarian meals on Halloween such as apples, pumpkin, pancakes, and cider. It was common for Christians to walk to their local cemeteries after the Halloween church service to place candles on the graves of their love ones who had passed. “Soul cakes” were baked and shared by children door to door to honor the dead, suggesting the beginning of the idea of trick or treating. Some believed the souls of the dead wandered the earth until All Saints Day, giving them last chances for revenge before their soul rose to heaven. The idea of wearing costumes came about as a disguise to hide from the wandering souls. The Jack O’Lantern was believed to represent the soul of the dead. During the Reformations many of the ideas of “Purgatory” were admonished and abandoned; therefore, altering Halloween practices dramatically. Today, we are left with a highly over marketed, commercial day that is more about decorations, parties, children, and costumes more than anything religious. However, it is a fun time of year to play to our desire for ghoulishness, horror, and “dark” magic. Oh and let’s not forget CANDY and WINE! 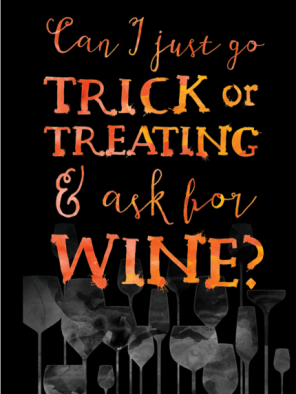 Casillero del Diablo wines are a perfect Halloween pairing! According to legend, sometime in the 1880s Don Melchor de Concha y Toro, an eminent Chilean statesman and wine producer, discovered that his most treasured wines had been pilfered from the “casillero” (cellar) beneath his ancestral home. To discourage further theft, the enterprising Don spread a rumor that his deepest, darkest cellars were haunted by the devil. Thus a legend was born, with Casillero del Diablo, today Chile’s best-selling wines worldwide and the original Concha y Toro family estate, complete with Devil’s Cellar, now Chile’s number one tourist attraction, bar none.

Casillero del Diablo Reserva Sauvignon Blanc: Crafted of 100% Sauvignon Blanc; soft gold with green highlights; fresh and clean aromas of citrus, tropical fruits, fresh cut grass and white peaches; fresh and clean follows through on the palate ripe with fruit on a mineral driven foundation, round and persistent acidity leaves a lingering, mouth-watering finish. If you like a fresh, crisp wine with high acidity as much as I do this wine is for you! Pair with seafood, poultry and cream based pastas. SRP $12.

Though these wines may have been stored in hell, they are made in viticultural heaven. With its steady sunshine, cooling winds, phylloxera-free vineyards, abundant land and labor, Chile is a winemaker’s dream. Add to this a winemaking traditional based on French grape varieties and winemaking techniques and you have a winning combination. High quality wines can be made inexpensively, which Concha y Toro successfully demonstrate with the release of Casillero el Diablo wines. Robert Mondavi in California helped open the dorr, labeling his wines not by geographic region, but by grape variety. The goal was to attract new wine drinkers. The Casillero del Diablo wines are ideally suited to this emerging market. Today, Casillero del Diable Cabernet Sauvignon is still made at Concho y Toro’s Maipo estate with its Devil’s Cellar. In 2005, it was named “Best Value Cabernet Sauvignon on the Planet” by Decanter. In 2007, Casillero del Diable achieved a further milestone with the debut of a Reserva Privada Cabernet-Syrah. In the spring of 2013, Casillero del Diablo launched a Coastal White and a Winemaker’s Red.

Casillero del Diablo crafts elegant wines at an affordable price, protected by the devil and perfect for Halloween. They are well distributed throughout the US so head to your favorite local wine retailer and pick up a few bottles today, along with some candy, and you will be all set for a devilishly good Halloween!

My Song Selection: There are many fun songs to pair with Halloween. I particularly like this one:

Get your own bottles of Casillero del Diablo Sauvignon Blanc and Cabernet Sauvignon for Halloween and let me know what song you pair with them. Cheers!

Where are my fellow Nebbiolo lovers?
Friends, it has been a week!
Today on Forbes I explore Italy’s Piemonte wine region through three fabulous wines - Barolo, Barbaresco, & Barbera.
My virtual spring travel continues this week as I reminisce about a marvelous media trip to Franciacorta.
I’ve been waiting all week for #openlocalwine day!
I’ve begun pregaming for Saturday’s #openlocalwine day.