#Wine at the Center of Cultural Crossroads

There are places in the world where boarders have been altered and adjusted so many times that though they may exist in a modern form the inhabitants live the lives they have always enjoyed regardless of the so-called boarders. Often these places represent the most interesting places on earth, a beautiful patchwork quilt with individual squares presenting each cultures uniqueness yet woven together with the same yarn creating a beautiful harmony like nowhere else on the globe. These pockets of cultural crossroads exist all over our beautiful planet. This month our Italian Food, Wine, Travel group is exploring one such region: Friuli-Venezia Giulia. 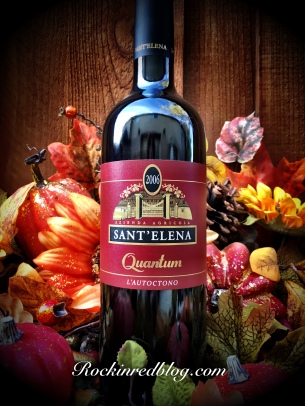 Cultural crossroads are formed throughout history; it takes centuries to create such unique locations. Friuli is located in far north eastern Italy bordering Slovenia and Austria. In the second century BC Friuli fell under Roman rule. Due to its location on the Adriatic Sea, Aquileia was a prominent Roman city during this time. The significance of Aquileia’s location gave the Romans a strategic position to intercept Barbarian invasions from the east; resulting in Julius Caesar quartering his soldiers in Friuli over the winter months. At different points in modern history this region has been under the rule of the Hapsburgs, the Venetians, the Austria-Hungarian Empire, the Slavs and finally after World War II it became part of Italy. Languages heard spoken throughout the region include Italian, Slovenian, Friulian, and German.

The culture of the wine in this region was broadly spread by the Roman at the times of the empire. They expanded what already used by the first inhabitants of these place, called Eneti, that seems they had got the grapevine from Greece enriching so their agricultural production with the addition of this important plant. During the whole Middle Ages the wine-growing of the region continue, although the period has been very troubled; the export of the wine didn’t have any reduction, especially to the republic of Venice, that already knew the important products of this area and it promoted them in all the European countries. During the Renaissance the fame of the wines of Friuli continue to be very high. Subsequently, from 1509 the territory of Friuli passed to the Asburg: the wines of this zone were always very appreciated by the Royal family and cheering the banquets of the court in Vienna.

Having never tasted a wine from Friuli, I could not wait to select a wine and give it a sip. Here is what I selected and how a few tasting notes: 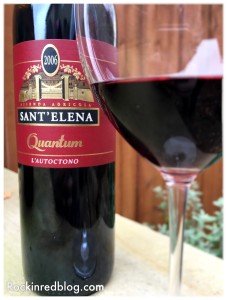 Sant’Elena L’Autoctono Quantum 2006: This wine was crafted of 100% Pignolo grown in stony alluvial soil in Fruili Isanza. The grapes for this wine are hand-picked then laid out on straw mats to dry for fifty to sixty days for appassimento and surmaturazione to allow the sugar content of the grapes to become fully concentrated.  Dried cherries, raisins, fruit cake, licorice, Asian spices and a touch of tar infiltrate the nasal passages while they coat the palate; after a two hour decant the wine still has plenty of umh, with rich and round acidity and persistent tannins that indicate this wine is still quite young but with more time will age to a seductive mistress vying for your attention away from the other better known big Italian reds. It offers a full mouth feel with well integrated flavors from front through middle to rear palate. The Quantum 2006 has everything I want in a big Italian red. I loved it and will buy more to rest peacefully in my cellar till it comes of age.  This wine was aged for 36 month in new French oak barrels before bottling. 15% alcohol. 94pts RP. SRP $52.

Ideal food pairings include gamy red meats such as venison and wild boar. However, on a cold Texas night I chose to pair the bold Quantum with a hardy Italian beef, barley and lentil soup typical of the Friuli region. In mid-November Another Foodie Blogger published a recipe for Ground Beef and Green Lentil Soup. It looked so delicious and easy; I knew I had to make it for my family. As I was researching Friuli I learned the region eats a lot of soup, lentils and barley. I thought Another Foodie Blogger’s recipe would be perfect if I added some barley so I combined that recipe with Italian Lentil and Barley Soup recipe I found on Pinterest for a truly outstanding soup that combined all the ingredients I was seeking for an authentic Friuli dinner. I recommend you explore both recipes or combine them into one for a hardy and delicious winter meal to pair with an equally hardy red wine. 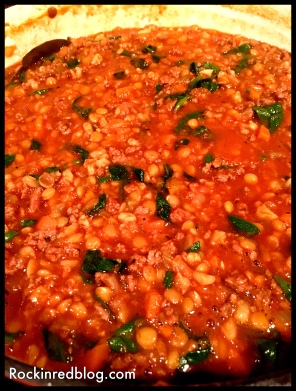 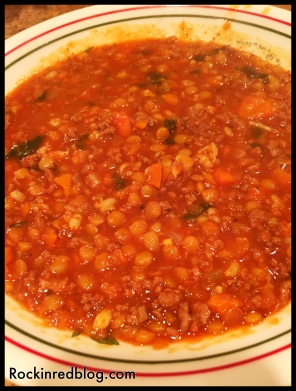 More about Azienda Agricola Sant’Elena from their web site:

Exactly why the Klodic family chose the name “Sant’Elena” remains a mystery, as no surviving documentation exists. It might have been in honor of Flavia Julia Helena Augusta, mother of the Roman emperor Constantine the Great, credited with having discovered the fragments of the True Cross and the tomb of Jesus at the rock of Golgotha. It also might have been after the mythological figure of Helen of Troy, known for her stunning beauty, and whose abduction brought about the Trojan War. Acquired by Dominic Nocerino in the late nineteen-nineties, Sant’Elena now finds herself on the path to modernity, with the singular goal of producing wines of the highest caliber. With over a century of growing history, Sant’Elena became fully dedicated to wine production as early as the nineteen-sixties, yet significant improvements of the past decade have taken the product’s quality level to new heights.

The Sant’Elena estate has a surface of approximately 40 hectares in a single plot. Our wines are made with tremendous care and a edication to quality that starts in the vineyards with the cultivation and maintenance of the grapes. Sant’Elena is situated at the intersection of the cold continental airflows from the east and the Sirocco (Mediterranean) winds from the south. This climatic alternation proves positive in terms of thermal variation, while the Giulie Alps mountain range protects the vineyards from the icy winds of the north. Located on the banks of the Isonzo River, the vineyards grow on ground formed by a superficial layer of around 60-80 centimeters of red ferrous soil of alluvial origin, above grounds of decalcified organic matter. The stony alluvial base has an elevated drain that gives the roots favorable conditions for airing and development, and when tasting our wines, this minerality is detectable on the palate.

Vino Travels – Pignolo and Schioppettino and Picolit, oh my!

Enofylz Wine Blog – A Taste of Friuli, Got Prignolo?

Orna – A Stroll through Grado: The Sunny Isle

Join our live chat this morning at 10 CST on Twitter using #ItalianFWT.

We are going to begin 2016 exploring some of the lesser known regions of Italy; starting with Basillicata in January. Please join  us again on Saturday January 2nd at 10am CST to kick off the new year of #ItalianFWT!

My Song Selection: Sant’Elena Quantum 2006 was a dark, rustic and brooding wine with lots to soul and just a touch of smooth funk. Great wine that reminded me of this great song!

Get your own Sant’Elena L’Autoctono Quantum 2006 and let me know what song you pair with it. Cheers.

22 responses to “#Wine at the Center of Cultural Crossroads”