Have you ever felt your intuition pulling you in a direct that is unknown and uncomfortable? We are so often afraid of the unknown, afraid of the dark. But darkness is only the absence of light and once we shine a light into the darkness our fears often immediately disappear. When time and space collide it’s called a black hole, truly epic darkness. But what happens when time and a specific place on earth collide? When we take the Indiana Jones step of faith and go where we feel the universe and our spirit is calling to go? Okay sometime we were wrong and we fail. It happens. But sometimes we success beyond our wildest imaginations. We call this fate, providence, destiny or karma. And what happens when your instinct calls you to a special plot of land, a tiny acreage that comes together in the middle of two wide open spaces? That is called Hourglass Winery.

Although Hourglass’s first vintage was 1997 they have remained a cult winery, flying under the consumer radar yet each vintage is met with resounding endorsements and high praise from the world’s top wine critics and oenophiles alike. I was recently blessed to be invited to participate in an Hourglass virtual tasting hosted by Charles Communications and lead by Hourglass proprietor Jeff Smith and winemaker Tony Biagi. Let me tell you friends it was quite a treat! I will share with you the three wonderful wines we tasted but first a bit about Hourglass Wines.

What we know today as Hourglass Winery began in 1975 by Jeff’s father Ned as a fruit farm. The fruit would not grow so he replanted the farm with zinfandel, which saw success until a phylloxera outbreak in 1990. Upon the death of Jeff’s father his mom wanted to sell the land, but Jeff felt the land had potential to grow world class grapes. Following his intuition, Jeff reached out to a buddy at UC Davis and with the help of his friend the “faithful” meeting with Dr. Kliewer took place on Jeff’s family property. After careful inspection of the soil Dr. Kliewer explained the soil had “Hambright” which is “like striking a vein of viticulture gold… not good for much, but magic for Cabernet Sauvignon.” Beyond identifying the soil profile, Dr. Kliewer went on to explain, “The valley is shaped much like an hourglass. The Smith’s hillside vineyard lay precisely at the ‘pinch,’ or narrowest point: a bedrock outcropping of the Mayacamas Mountain Range that protrudes out to the middle of the valley thus creating the pinch. That little bedrock toe, with its unique geography, microclimate, Hambright soils, and hillside slope, provided a site unlike any other in Napa. It was in this moment, as the crouching Dr. Kliewer looked up to explain the nuances of the site, that the idea of ‘Hourglass’ took shape, its name flowing effortlessly from its terroir.” How is that for destiny!

Fate did not end there. Jeff Smith enlisted the assistance of his dear friend and former rock band buddy Bob Foley to be the winemaker in his new venture and in 1997 the first vintage of Hourglass wine was born. However, the fun had just begun for Jeff and Bob. In 2001 a tasting was organized before the Napa Valley Wine Auction. This “cult” tasting featured a flight of 1997 vintage Cabernet Sauvignon’s that Robert Parker had awarded 100 points, such as Screaming Eagle, Harlan Estates and Bryant Family. The organizer added Hourglass’s first release into the lineup as a “precocious ringer.” The joke was on everyone but Hourglass when the wine held its own and was soon sold out before it had even been released! A cult legend was born!

After seven successful vintages fait struck again as Jeff spotted a piece of land on his way to the dump. Together with friends Jeff and his wife purchased the land and constructed the Winery at Blueline by constructing it into the hillside behind the vineyard. The winery architect understood the Smith’s desire for a modern and elegant winery that took away “the clutter to reveal a pure essence.” The winery was completed in 2009 and today all Hourglass wines are crafted under the direction of winemaker Tony Biagi and he is amazing! 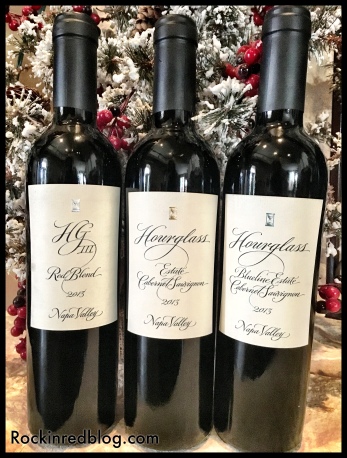 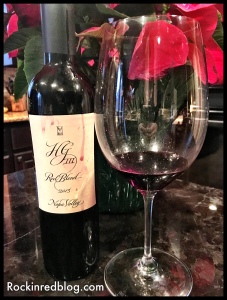 HG III Red Blend 2013: This wine was crafted of Merlot, Cabernet Sauvignon, and Malbec. It poured a dazzling deep ruby into the glass; attention grabbing aromas of black berries, dark cherries, black raspberries and pomegranate are met with notes of dark chocolate, cinnamon, vanilla; beautifully balanced with great structure, energetic yet focused; round acidity with surprisingly silky tannins for such a young wine; drinks beautifully now; time will only add elegance to this beautiful wine; 20 months in new and seasoned French oak. SRP $50.

Hourglass Blueline Estate Cabernet Sauvignon 2013: This wine was crafted of 85% Cabernet Sauvignon, 9% Petite Verdot and 6% Malbec.  It poured a deep ruby with inky violet highlights; black fruits, spice notes, graphite, dark chocolate, and earthiness envelop the senses while delivering a complex and powerful mouth-feel; silky smooth tannins are well integrated beyond its young age; this wine has loads of character and continued to develop in the glass over the course of the evening; not much more one can ask of a glass of wine; full-body; rich lingering finish. 21 months in new French oak. SRP $125. 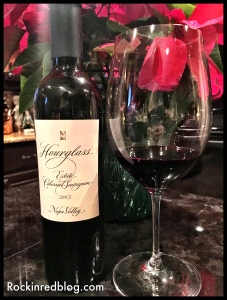 Hourglass Estate Cabernet Sauvignon 2013: This wine was crafted of 100% Cabernet Sauvignon and poured a deep ruby with violet highlights into the glass. This dark brooding wine captured the senses with aromas of dark berries, plums and currants,  licorice, dark chocolate, rich spice notes, and fresh tobacco with a touch of smoke and follows through on the palate with a suave elegance that is rich with precision, elegant yet deliberately cozy; it is complex with layers of flavors that develop from the first pour to the end of the last glass; long and lean this full body wine is perfectly structured with round acidity and amazingly integrated tannins; I cannot imagine how good this wine will be as it evolves in the bottle for 5 to 10 more years; 22 months in French oak. SRP $165. This wine is as much an essence of time and place as any Napa Valley wine I’ve ever had; offering a true sense of terroir of the  “Hambright” soil’s impact on Cabernet Sauvignon. The first sip is an “eyes rolling back in your head” experience. Yes, its expensive but if you can afford a splurge its worth every penny!

Jeff and Tony feel the 2013 Estate Cabernet Sauvignon is “a perfect moment wine” meaning it is a “culmination of all the ‘right’ mistakes” dating all the way back to 1975! Furthermore, the 2013 Estate Cab represents “the core of what Hourglass Wines is trying to do.”  It is crafted with precision, allowing a richness in color and mind blowing aromatics that only the world’s best wines offer. As winemaker, Tony believes in working tirelessly to get “it right” the first time saying “if you get it wrong you have 18-24 months to fix the problem; if you get it right you spend that time babysitting.”

These gorgeous wines are beautiful to sip and enjoy; however, they will also pair well with pepper grilled steak, beef tenderloin with creamy gorgonzola sauce,  osso bucco, braised venison and bison burgers.

Hourglass has always been heavily influenced by a sense of place, what the French deem terroir. As we have expanded to encompass two dramatic vineyards (the original Hourglass Vineyard & the new Blueline Vineyard), our objective remains the same – to craft highly expressive wines reflective of their unique sense of place. But it is more than just a sense of place. The convergence of soil, weather, geography and the human hand are what you taste every time you pull the cork from one of our wines. Part splendor of nature, part art, part science, wine is a complex web of relationships that yield the final result.

My Song Selection: On the Hourglass web site “about” page it explained how their original wine maker, Bob Foley, did not achieve his desire to be an actual rock-star but he had achieved “rock star status” as a winemaker and has the “has the deep purple-stained hands to prove it.” Today Tony Biagi has achieved his own Rock-Star Status as a wine maker as he is rocking the wine world with Hourglass wines. But you know me, when I saw the words “rock star” and “deep purple,” well that’s all it took.

5 responses to “Hourglass Wines: An Endless Moment of Destiny”