Words that have been used to describe Charles Smith include obnoxious, loud-mouth, rock n roller, and twice named Winemaker of the Year, by Food and Wine Magazine in 2009 and Wine Enthusiast Magazine in 2014. He has experienced extreme poverty, travelled Europe, bartended, and manage rock n’ roll bands. How does a crazy guy like Charles Smith become one of Washington State’s most celebrated wine makers? Because he is crazy like a fox.

Charles Smith grew up in Sacramento, California in less than ideal circumstances. He lived for a time with his Welsh mom, then his French father, but at age 18 he had enough and followed a girlfriend to Denmark. He worked in a restaurant as a teen in California. While there he observed the “wine guy” had the best job. He had hoped to join the wine industry in Denmark but life had other ideas. Instead, he became a manager for rock bands and managed European tours. This job included lots of wining and dining throughout Europe, only fueling his passion for wine. He returned to the US in 1999, landing in Bainbridge Island in the Pacific Northwest and opened a wine retail shop. He met a French winemaker from Walla Walla on a road trip who convinced Smith to relocate to the same region and begin making wine. In 2001, Smith, a self-taught winemaker, released the first vintage of his K Syrah. Smith was one of the original 20 wineries in Walla Walla, today there are over 120 bonded wineries.

Charles Smith Wines was launched in 2006 with a focus on creating wines true to their varieties, yet to be consumed upon purchase. No need for cellar aging, just buy, open, pour, and enjoy. To further this point, Charles Smith Wines are sealed with screw-caps and all have a price point of under $20! Smith believes wines should be complex and balanced (and his are) but don’t require hours of decant or years of cellaring. If you see a Charles Smith wine on a restaurant wine list (and you will) you can be assure it is ready to be enjoyed and will pair well with food.

It did not take long for the wine world to recognize Charles Smith was something special. As stated above, he was named Food and Wine Magazine’s Winemaker of the year 3 years after launching Charles Smith Wines, and again in 2014 by Wine Enthusiast Magazine. These are laudy accolades for a former rock band manager turned self-taught winemaker. In the fall of 2016, Constellation Brand came knocking on Charles’ door. They struck up a deal and purchased Charles Smith Wines for $120 million. Don’t worry that the 2015 Kung Fu Girl Riesling, Wine Spectator Top 100 Wines of 2016, is going to change any time soon. Charles Smith will still be the winemaker for Kung Fu Girl as well as Chateau Smith Cabernet Sauvignon, Velvet Devil Merlot, Boom Boom Syrah, and Eve Chardonnay. Furthermore, the awesome labels of the wines will not be changing either. One change you will see is better distribution and availability of these crowd pleasing wines. 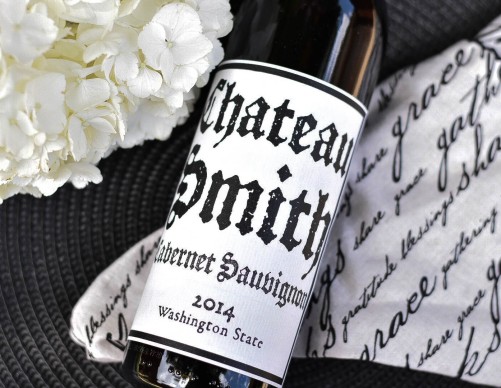 My Song Selection: I had decided to pair Charles Smith Wines with Nirvana before I came across the man himself wearing a Nirvana t-shirt. My reasoning is the wines are from Washington and they are truly grunge wines; bold, packed with resounding bass notes and high energy guitar riffs. The biggest question was which Nirvana song? My favorite is Lake of Fire but I felt it is too mellow for CS wines. I considered Come as You Are because it seems to fit Charles Smith’s philosophy, but it did not rock enough for these wines. So I decided upon this…

Get your own bottle of Charles Smith Wines and let me know what song you pair with them. Cheers.

Like Loading…
← Paso Robles: Adding Spice to Life
→ Julien Miquel: A Man of the World of Wine